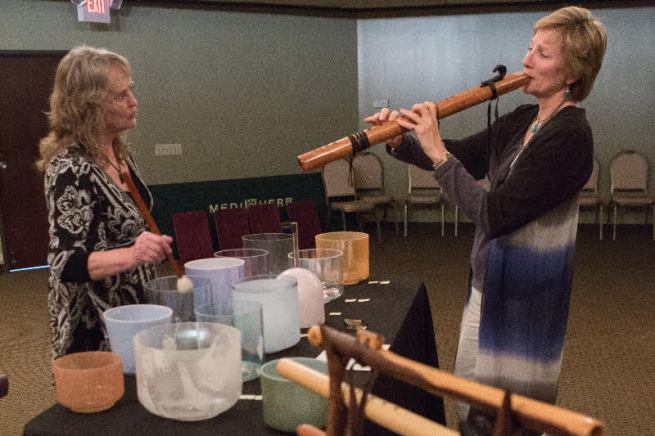 In 2014, Gahana and Beckie began playing together as a sound healing duo, when they were called into service for a hospice patient. Once they had their first experience with working together to produce beautiful music and the healing sound vibration for this dying woman, they knew they were on to something bigger than themselves.

Then in July of the same year, Gahana and Beckie came together for a group of spiritual seekers with the intention of deepening the meditative and spiritual experience of the gathering. Much to their amazement, Heartistry was born.  Everyone was bathed in the magical, mystical sound waves in what they now call a Heartistry Soundbath.

“We loved how it felt to play together and we knew then that there was something very special about this sound vibrational experience.”

Gahana discovered her love for the Native American flute as a child, but it wasn’t until 1995 when she was gifted with her first Native flute, that the spirit of the flute called her closer.  She studied Native flutes and artistry for several years with renowned flutist,  Virgie Ravenhawk.  At the Mt Zion Flute Festival in 2008, Gahana met Gentle Thunder, who was one of the featured performers and a Grammy nominated multi-instrumentalist.  Through grace and good luck, she became Gahana’s next flute teacher and heart friend.  Both of these special women have helped Gahana to open her awareness within and to allow a more universal story-song to be played through her.  In 2010, I became a musical volunteer with Hospice Austin and was blessed to be able to share her flutes with patients and family members on a weekly basis. It was in this setting, a place of such raw vulnerability, that she truly learned to play from a space deep in her heart.

December 2012 Beckie ventured into the mystical work of helping people heal mind, body and spirit.   It took her a while to find my place but the day that the 12 bowl chakra set of Alchemy Crystal bowls arrived at her door…she knew.

The bowls, each infused with a particular gemstone, mineral or metal, give each bowl it’s own unique signature and a crystalline amplified voice that delivers specific properties.  The pure 432hz sound of Alchemy crystal singing bowls, began calling Beckie to play with the Universal vibrations that connect every living being.  Their soft feminine tones and sweet energies play through Beckie and send the magical vibration out into the ether for healing.

Your music is sweet wine that fills the cup of silence

Amazing healing music! We play this album all the time in my chiropractic office. Since we began doing this, the energy of our office has changed in a powerful way. My staff and I are much more focused and present and our patient’s have all been commenting how peaceful the office is lately. I recently […]